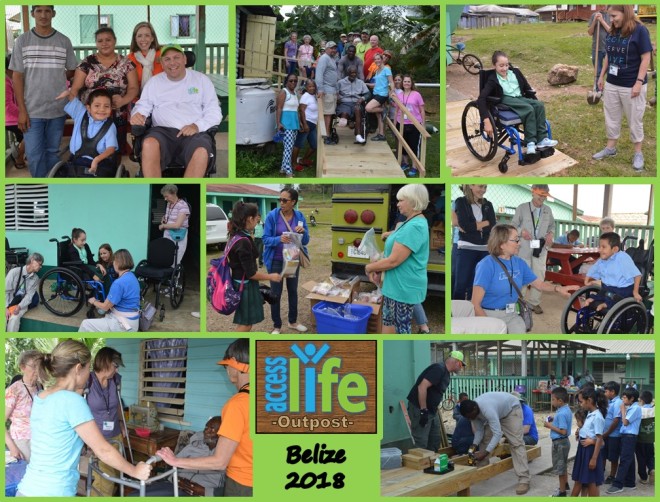 One of the joys of coming to Belize year after year is getting to see people who we helped and find out how they are doing. This year on Tuesday, the team went to Cotton Tree School with plans to meet up with Wilson and Sierra, two children we met in 2017. Both of them attend the school and needed ramps to make their classrooms wheelchair accessible.

When we arrived at the school, children were arriving for the day and were excited to see a group coming to visit. At first, it seemed that neither Wilson nor Sierra was coming to school that day, so our team spread out visiting classrooms as they did their morning devotions. After a few minutes, Wilson’s parents came, carrying Wilson in their arms. The wheels on the stroller we had given him last year had broken due to the rough gravel roads. We heard from Sierra’s mom that she was not going to be at school for the day. 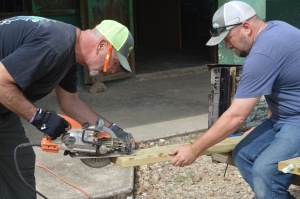 Once Wilson was settled in his classroom, Korie and some of the guys on the team began working on the ramp into his classroom. The original plan was for a simple ramp that would be attached to the sidewalk with concrete screws that could be removed and moved with him to other classrooms each year. After seeing the layout of the school and the sidewalks, the plans were enhanced to make a “three-way” ramp so that Wilson could go all directions coming out of his classroom. 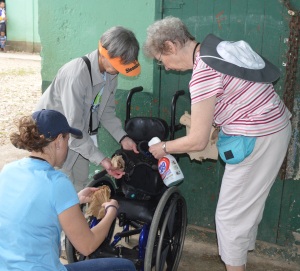 While the ramp was being built, Nancy, the team PT and Pam, an OT on the team, evaluated Wilson in his classroom how to make the chair work best for him. Helen and Tiffanie helped Nancy and Pam to get the chair cleaned up and adjusted, and then the real fun began! 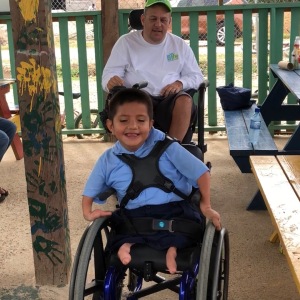 We brought Wilson to a picnic pavilion near his classroom and let him try out the chair. The look that spread across Wilson’s face when he realized that he could propel the chair on his own was priceless! Nancy and Pam made slight adjustments and showed Wilson’s parents how the chair worked, and then Wilson was off! He wanted to race with Doug and the two of them had fun wheeling down the sidewalks. 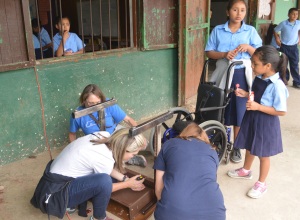 Others on the team were also able to adapt a desk for Wilson to be able to roll right under it and got it moved into his classroom. All of the teachers and staff at school were so helpful and it was great to see how they and the children all loved Wilson and were happy that he was able to get a chair! 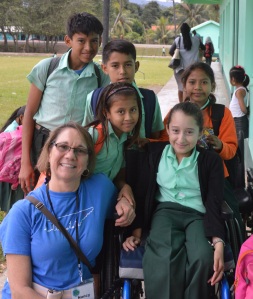 In the aftenoon, the team went to visit Armenia Government School to bring a chair to a girl named, Neymi. She had come to the Access-Life Expo in 2015 and received a chair, but it was getting too small for her and it was not in good shape after three years of use. We found Neymi in her classroom and asked if she’d like a new chair. Her face lit up and she was excited to get fitted for the chair that had been chosen for her.

Korie and the guys got to work on building a simple ramp for Neymi to be able to get to her classroom. Things went quickly with that ramp and it was completed just as school was getting out for the day. Neymi tried it out in the chair and her brother and cousin were there to help take her home. 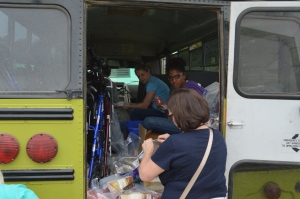 While the ramp was being built, some of our team put together packets of rice and beans and Bibles to distribute to the school families at dismissal. Many families came to get the packets and were thankful to receive the food. All capping off a great 1st full day in Belize. 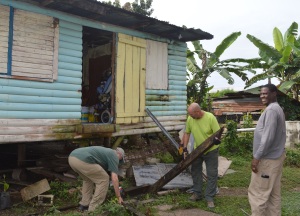 The plan for the day was to build a tiered ramp for Edward Roland, who had recently had his right leg amputated. He and his family live in Roaring Creek Village, not far from the Hearts of Christ mission, so Korie and the building guys went to get the materials and headed to the house to get started. Alicia brought Nancy and Nanette over to meet Mr. Roland and to access his need for crutches, walker, wheelchair or a combination of the three. Edward’s wife, Juanita, also cares for their eleven year old granddaughter, Sherise, who has hydrocephalus and his blind. 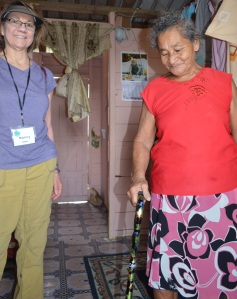 After meeting the Rolands, Alicia brought Nancy and Nanette to visit Ms. Marcelina to see if she might have a need for a new cane. We found her in a neighbor’s house where she goes during the day, and Nancy talked with her about what would work best for her. Later in the afternoon, we were able to bring her a new cane that had pretty designs on it, which Nancy picked out after seeing some of Ms. Marcelina’s beautiful embroidery work. She loved her new cane and was happy to get it! 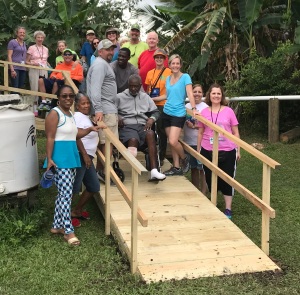 After lunch, the team all went back to the Roland’s to deliver a wheelchair, walker and cane, as well as some supplies to help with the care of Sherise. Nancy and Pam showed Edward how to use the equipment to get around in his house and then rolled him to the other side of the house so he could see the ramp that was being finished up. While the guys finished the ramp, Leanne and Sally spent time visiting with the Rolands, while the rest of the team walked around the neighborhood to give out rice. It was great to come back and see the finished ramp and to take a team picture with Edward and Juanita on the ramp.