Preparing for the Expo:

Throughout the week in Belize, the team spent many hours sorting equipment and getting it ready for the Expo. After spending many hours in the shipping container, all of the wheelchairs, walkers, crutches and bedside commodes needed a good cleaning and some also needed repair. Team members pitched in with rags and spray cleaner to wipe down every piece of equipment that would be given out later in the week.

Norm, Korie, Nancy, Janet, and Tiffanie did some repairs on the various chairs. The dynamic duo, Nancy and Kaila, along with Tiffanie, assembled four manual chairs that were purchased from another ministry. Some may have doubted their ability, but they persevered and showed that they had what it took to get the job done! 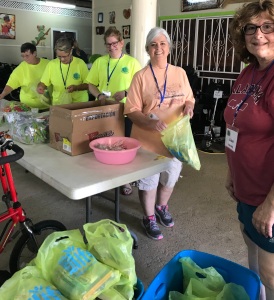 The team also sorted through the supplies for the activities for the Expo, such as Arts, Crafts, Games and Prayer/Care. Sand crosses, gospel bracelets and picture frames were prepared for assembly by participants. There were also items to sort and prepare to put in the goody bags that each participant received when they arrived. Everyone came to the team with unique gifts and talents and all were used for God good work in the preparation for the Expo event.

Edwin Chavez, Jr., is a boy who needed a chair so that he could go to school. He has a birth defect that disabled his arms. We were able to give him a manual chair with wheels that he could propel on his own.

Ryan Foster, a three-year-old boy born with Spina Bifida. He captured the hearts of those who were helping him get fitted with a chair and his smile would light up his face. He received a pediatric manual chair that he was able to propel on his own almost immediately, as well as a pediatric walker that would help him move around by himself.

Sherlene Cal, a patient referred by Dr. Mike, who lives in remote southern Belize. She was severely paralyzed from being given a wrong medication as a baby and was not able to move on her own. Her family drove several hours to come to the Expo, arriving before sunrise on Saturday. She was able to go home with a pediatric chair with tilt function to help her parents care for her.

Jacquine Welby, a 37-year-old woman, with severe disabilities, who had never had a wheelchair. After Jacquine was fitted with a manual chair, her mother Serita was so moved and thankful to be able to have some of her burden lifted. Serita also had suffered a mini-stroke and diabetes and was able to get a cane to help her get around easier. Debbie was able to offer hugs of comfort to Serita when she was overwhelmed with emotion.

Carnie Hyde, a woman who had suffered a stroke and had her left leg amputated. She is a mom of three daughters and received a power chair that would help her to have greater mobility. Carnie was also overwhelmed with the generosity of Access-Life and the help she was able to receive.

Wallace Tillett, a man who waited over five hours to have his turn in the wheelchair distribution area. He told Leanne that he kept watching people come out of the door with a manual or power chair and thought that there wouldn’t be any left for him. When his name was called and he was able to receive a chair power chair, he was overwhelmed with gratitude to the team and also recognized that God was at work at the Expo. He said, “I didn’t know you would have one for me!” He also was able to get a new cushion to help to relieve pressure causing a sore. His new chair also tilts, which will help him to change positions more often while he is using the chair.

Jesslyn is a girl with CP who has severe mobility issues. We were first able to help her in 2017 with giving her a pediatric gait trainer and then in 2018, she received a stroller. This year, she has grown and brought the stroller back in good condition to trade in for a larger one that fits her better. As God had worked out in advance, the very next girl who came in needed a stroller the exact size that Jesslyn had brought back.

Another example of God’s divine intervention was told by team member, Norm Clark. In working to repair a power chair, he had broken a part and was frustrated. On the Expo day, a man came in with a power chair to be fixed and we were able to give him a different chair. His old chair had the exact part that Norm needed to complete the repair on the chair that he had been working on earlier.

PRAISE GOD FOR HIS GRACIOUS BLESSINGS ON US AND OTHERS. :)